Push4Men is a 10-day challenge which promotes the importance of staying strong to prevent men's heart disease. People who join Push4Men will be attempting to complete 40 push- ups a day for 10 consecutive days. Why push-ups? Men are at greater risk of heart disease than women: 4 out of 5 people who die of heart disease before the age of 65 are men.

Some of the ways men can reduce their risk of heart disease are to stay strong, keep fit, eat well, lose weight and stop smoking.

Push4Men runs throughout Men’s Health Week, which starts on 14 June 2021, and is a great way to raise awareness about heart disease, the biggest killer of men in Australia, and the simple steps men can take to prevent a serious or fatal event.

If you are not ready to take the Push4Men challenge, we understand, maybe next year. In the meantime we appreciate any donation you can make. Simply click the donate button, or donate to a team or individual.

No matter how strong you are you can make a difference. Sign up as an individual or as a team.

Share with friends, family and colleagues. Every dollar raised will make a difference for men's health.

AMHF is the peak body for men’s health in Australia. It brings together people who are working to improve the lives and health of men and boys so we can:

Australia is one of the world’s wealthiest societies, yet our men and boys die younger, experience more disease and have less access to support services than women and girls.

AMHF was one of the key partners in the National Male Health Initiative that helped develop the new National Men’s Health Strategy 2020-2030 and is working to build a stronger men’s health sector by supporting the growth of male-friendly initiatives alongside more than 100 member organisations and individuals from across Australia. 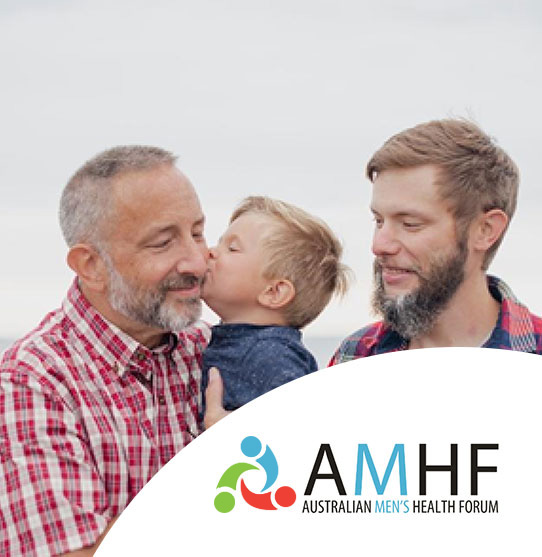 Staying Strong: The facts about Heart Health and Push-Ups

This is because research has shown that men who can do 40 push-ups are up to 10 times less likely to get heart disease than men who can’t.

In the study, participants were placed into five groups based on the number of push-ups completed and were tracked for 10 years, to determine whether they had experienced coronary artery disease or other major cardiovascular events. The average age of the firefighters was 39.6 years and mean Body Mass Index was 28.7.

During the 10-year follow-up, 37 cardiovascular disease (CVD) outcomes were reported. Participants able to complete more than 40 push-ups were associated with a significantly lower risk of CVD event risk compared to those completing fewer than 10 push-ups.

“The findings suggest that higher baseline push-up capacity is associated with a lower incidence of CVD events. Although larger studies in more diverse cohorts are needed, push-up capacity may be a simple, no-cost measure to estimate functional status,” reported the authors.

The Power of Push-Ups

Traditional push-ups are great for building upper body strength. They work the triceps, pectoral muscles, and shoulders as well as strengthening the lower body and core by engaging the abdominal muscles.

They can be done in multiple ways, and people can build up their capacity for doing more push-ups, starting with an easier press against a wall or from a half-knee position. They don’t require any equipment.

A Push-Up challenge is a great way to slowly increase your capacity. The Push4Men 10-day challenge can be taken at a number of levels starting with the ‘Have-A-Go-Hero’ – 40 push-ups over day days. Or the standard level asks participants to complete 40 push-ups a day over 10 days either as one rep, or split up throughout the day (Living Legend).

Like some of those Indiana firefighters, the Men’s Health Warriors in Push4Men will be pushing more than 400 times over the period.

Do we want to get the whole of Australia pushing?

Absolutely. The Push4Men Challenge is about raising awareness about men’s heart health: how to maintain it, how to prevent CVD and how to stay strong.

Learn the many ways you can do a Push-Up.

Cardiovascular disease is the leading cause of death worldwide and in Australia heart disease kills 50 people a day.

Men under 65 are 4 times more likely than women to die heart disease.

Six measures men (and women) can take to reduce their risk of heart disease are:

6. Getting a good night’s sleep

Connect with us @MensHealthAMHF #Push4Men #4MensHealth